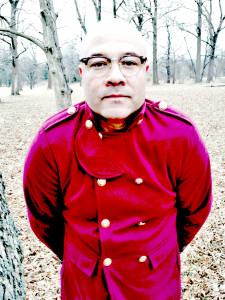 With a studio guest list that includes honorary members of Smoking Popes, BoDeans, Off Broadway, Robbie Fulks’ band, NRBQ and Lupe Fiasco, the new LP from Chicago’s King Mixer has arrived.  King Mixer is both musical ensemble and performing alias of songwriter Eric Howell, who fronts a sound that is at once “equal parts Paul McCartney and Paul Simon backed by R.E.M.” (Audities Powerpop Fanzine).  At a moment when guitar bands are fighting for a place in modern music, King Mixer and producer Christian Cullen offer up deliberately backdated sounds with a postmodern flare, which become harder to pin down with each genre-defying twist.  And there are many quick turns.

The long shadow of the British Invasion, Motown, the twang of Americana, the sunny ’70s of Laurel Canyon and the pangs of Irish melancholy are all detectable in King Mixer music, but these seemingly incongruent additives are unified by a single songwriter.   It’s a melting pot which owes a lot to an infant Howell’s discovery of the cultural contrast in the combined vinyl collections of his parents (African-American father, Polish-Irish mother).  Eric’s early awareness of Nat ‘King’ Cole, Charlie Parker, The Monkees, Burt Bacharach, The Jackson 5 – and an everlasting fascination with The Beatles – eventually gave birth to original songs that tapped the veins of Tom Petty & The Heartbreakers, had the hooks of local power pop heroes Off Broadway, and possessed the uncompromising passion of early Bruce Springsteen or U2, as filtered through the inherent Midwestern irony of Cheap Trick and The Replacements.  By the time the bombast of the ’80s was at its loudest a then teenage Howell – despite an inability to read music – had stockpiled hundreds of paired down original pop songs at a Tin Pan Alley pace.  Finding commercial success, however, proved more elusive.

Following a prerequisite stint with early college bands in the late ’80s, Howell performed in every kind of setting imaginable, earning heavy rotation on local radio back when such a thing was possible for an unsigned band.  Although his band enjoyed success locally, widespread acclaim continued to dodge his music.  Broke yet undaunted, Howell weathered a bout with homelessness, squatting for nearly a year in a boarded up building that doubled as a punk rock rehearsal studio in southern Illinois.  He sold off his possessions (everything but the guitars) and migrated wherever the music led, eventually landing on his feet back in Chicago and supplanting his hard knocked experiences into songs which became his first album, “Eric Howell’s Greatest Hitch! Vol One”.  A relative break came when he licensed one of his songs to a major network television show, which helped pay some bills and propagate his original music a bit further.  His starving artist days now in his rear-view mirror, Howell performs regularly in the Chicago area and it is a steady stream of live performances which keep Eric connected to his audience the old school way – in the flesh – be it with a band or with just his voice, his guitar and his songs.

With the release of 2016’s crowd-funded ‘Hang On‘, an album enhanced by A-list musicians Nick Kitsos (BoDeans/Michael McDermott), Mike Felumlee (Smoking Popes/Alkaline Trio), Brendan Peleo-Lazar and Neil Candelora (The Ivorys), Cliff Johnson (Off Broadway), as well as guitarists Grant Tye (Robbie Fulks) and Scott Ligon (NRBQ/ The Flat Five), the long road to the realm of recognition looks promising for King Mixer.  The band will play a series of winter shows in and around the Chicago area in 2016, in support of the Hang On release.